2.) Explain how a skeletal muscle contracts.
The sarcolemma is depolarised by a nerve impulse. The sarcoplasmic reticulum releases calcium ions and these bind to thin / actin filaments. The binding sites are exposed. Hence myosin head binds and a cross-bridge forms. The head bends and pulls thin / actin filament. Sarcomere shortens / distance between Z lines shortens. ATP binds to the myosin head. This breaks the cross-bridge and the head swings back to the start position.

5.) Evaluate the risks and benefits to an athlete of using erythropoietin (EPO).
EPO is produced naturally by the body to stimulate the formation of red blood cells. Using EPO will increase the red cell count. More oxygen supplied to muscles could improve performance, especially useful for endurance events. Blood is thickened which can cause blood clots/strain on the heart. This causes an increased risk of heart attack/stroke and increased risk of dehydration in endurance events.

7.) Outline how the oxygen debt is formed and repaid.
Anaerobic respiration in muscle produces lactate. Lactate is transferred to the liver via blood. The liver converts lactate back to pyruvate. Pyruvate oxidised to carbon dioxide and water/enters the Krebs cycle. For this oxygen is required. Deep breathing continues (for a short time) after exercise has ended to supply oxygen to repay debt

9.) Distinguish between a sprain, a tear and a dislocation.

10.) A reliable method of estimating cardiovascular fitness is by measuring the body’s oxygen consumption when the rate of heartbeat is at its maximum (Vmax) during intense exercise. This test was used to measure fitness among 71 volunteers. Two weeks later, the same individuals were asked to run for 2.1 km at two different speeds (V70 and V90) and the power they developed during these runs was measured.

B. Outline the relationship between running velocity and power developed at V90.
as velocity increases power increases

C. Compare the data for V70 and V90.
Both have the same/similar maximum power. Both show increased power at greater velocities.

D. Suggest why measurements of Vmax are dangerous for older people.
Risk of heart attack

11.) During the muscular activity, the heart must deliver more blood to the tissues due to increased oxygen demand. Graph 1 shows the distribution of total blood flow (cardiac output) between muscles (grey-shaded bars) and all other parts of the body (black-shaded bars) in resting men and in both average men and top athletes doing heavy exercise. Graph 2 shows oxygen consumption by the muscles and all other parts of the body in the three groups. The value given for each bar represents the total body values. 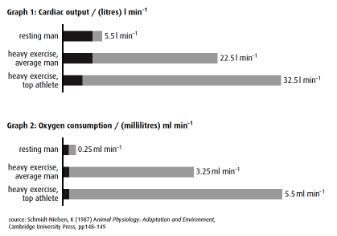 A. Describe the relationship between exercise and total cardiac output.
Directly proportional

B.
(i) Calculate the percentage of cardiac output to the muscles for an average man during heavy exercise as compared to the total body value.
82.5 (±3)%

(ii) Calculate the increase in total oxygen consumption (ml min−1) for a top athlete during heavy exercise as compared to a resting man.
5.25