1.) Explain the process of translation.
There are three stages in translation: initiation, elongation and termination. mRNA translated in a 5′ → 3′ direction. mRNA binds to ribosomes. The tRNA binds to start the codon. tRNA anticodon binds to mRNA codon by complementary base pairing. AUG is the start codon. Second (charged) tRNA binds to ribosome / to mRNA. Large subunit binds to small subunit. The amino acid on the first tRNA is joined to the amino acid on the second tRNA by condensation. As a result, a peptide bond formed. The ribosome moves (in a 5′ → 3′ direction) by one triplet/codon. Now, the tRNA in the exit site leaves and a new/third (charged) tRNA Binds. This repeats until reaches a stop codon and polypeptide is released. tRNA-activating enzymes join the correct amino acid to its specific tRNA.

3.) It had always been assumed that eukaryotic genes were similar in organization to prokaryotic genes. However, modern techniques of molecular analyses indicate that there are additional DNA sequences lying within the coding region of genes. Exons are the DNA sequences that code for proteins while introns are the intervening sequences that have to be removed. The graph shows the number of exons found in genes for three different groups of eukaryotes. 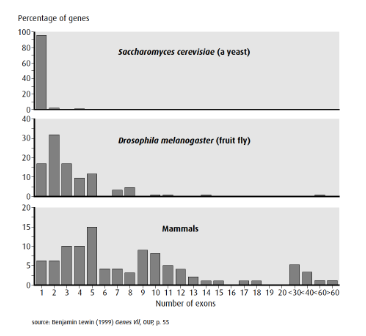 A. Calculate the percentage of genes that have five or fewer exons in mammals.
47–49%

B. Describe the distribution of the number of exons and the percentage of genes in D. melanogaster.
Drosophila has a few genes with one exon. The highest percentage has 2 exons;

C.
(i) Compare the distributions of the number of exons found in genes of S. cerevisiae and in mammals.
Yeast has the most genes with only 1 exon, while for mammals 5 exons is most frequent;

(ii) Suggest one reason for the differences in the numbers of exons found in genes of S. cerevisiae and in mammals.
Yeast is a unicellular organism, whereas mammals are multicellular

4.) Outline how meiotic division results in almost infinite genetic variation in the gametes produced.
Crossing over takes place. Then there is the exchange of alleles. There is a random orientation of chromosomes at metaphase I and at metaphase II.

5.) Explain a cross between two autosomal linked genes.
When two genes are linked, they do not follow the expected phenotypic ratio for a dihybrid cross between heterozygous parents. Instead the phenotypic ratio will follow that of a monohybrid cross as the two genes are inherited together. This means that offspring will tend to produce the parental phenotypes. Recombinant phenotypes will only be evident if crossing over occurs in prophase I and would thus be expected to appear in low numbers (if at all). An example of a cross between two linked genes is the mating of a grey-bodied, normal-wing fruit fly with a black-bodied, vestigial-wing mutant.

6.) Explain antibody production.
Antigen causes the production of antibodies specific to that Antigen. Antigen taken up by macrophage. Antigen presented on the surface of the macrophage to helper T-cell / TH cell. Helper T-cell divides into a clone of active cells. Active helper T-cell activates B-cell with antibodies specific to the antigen. B-cell activated and divides into clones of active. Memory cells are creatives. Active B-cells / plasma cells secrete large quantities of antibody

7.) Outline how the fluid in the proximal convoluted tubule is produced by the process of ultrafiltration.
Efferent arteriole has a smaller diameter than afferent arteriole to increase (hydrostatic) blood pressure in the glomerulus. Glomerular capillaries have pores. Bowman’s capsule cells have processes/podocytes;
gaps between processes allow filtrate to pass through easily. Bowman’s capsule cells act as an (ultra) filter. Basement membrane only allows substances below a certain size to pass through. This process of ultrafiltration is passive.

8.) Explain how the cells of the proximal convoluted tubule are adapted to carry out selective reabsorption.
The large surface area is produced by microvilli and basal infoldings. There is a large number of mitochondria to provide energy for active transport

9.) Outline how muscle contraction is brought about, starting with the arrival of a nerve impulse at the muscle.
The arrival of impulse depolarises the muscle membrane. Voltage-gated channels are opened in the sarcoplasmic reticulum, allowing the release of calcium ions. Cross bridges form between myosin heads and (binding sites on) actin. Myosin head bends, pulling actin; the cross-bridge is broken. ATP is required. Myosin’s head returns to the start position. The contraction stops when calcium ions are pumped back into sarcoplasmic reticulum