There is an urgent need for increasing a tax on the sale of tobacco products, such as bidis, which are considered demerit goods as they are harmful to society. They create negative consumption externalities – costs that are suffered by a third party. For instance, as a consequence of passive smoking, non-smokers bear costs such as an increased risk of lung cancer. The market overallocates resources for this demerit good, leading to market failure. Let’s use the example of cigarettes to illustrate the impact of the indirect tax.

In Fig.1, the additional benefit incurred by the Indian consumers from consuming an extra tobacco product, Marginal Private Benefit (MPB), is greater than the additional benefits to society, Marginal Social Benefit (MSB). The demand curve depicts the MSB accrued to society, and MPB, whereas the supply curve represents the Marginal Social Cost (MSC), which includes the existing tax. 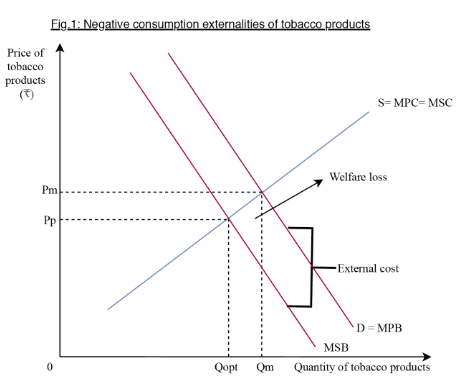 For tobacco, the external cost to society is represented by the vertical distance between MSB and MPB. The social optimum quantity is determined by the intersection of the MSB and MSC curves. However, there is excessive production of tobacco products as seen at Qm.  Hence, the consumption of tobacco is greater than the socially optimal quantity, leading to a welfare loss.

To minimize the production of such demerit goods to achieve the social optimum quantity (Qopt), economists recommend a hike in the indirect tax on tobacco products. Theoretically, this will lead to a decrease in tobacco supply as there is an increase in production costs. This is represented in Fig.2 by an upward shift of the supply curve from Marginal Private Cost (MPC) to S1. The quantity produced and consumed would drop from Qm to Qopt due to the intersection of curves S1 and MPB. As a result, the price would rise from Pm to Pc. 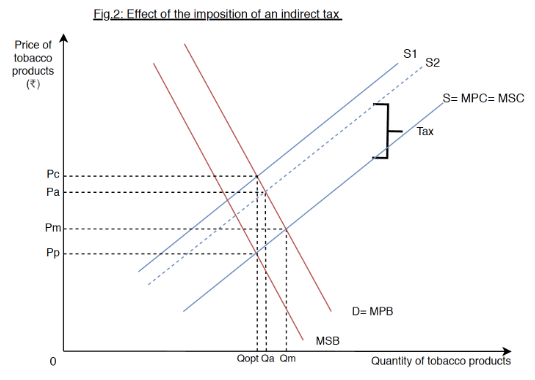 A high price may be a disincentive for consumers to purchase tobacco products or even initiate the usage of such, predominantly amongst the youth. Moreover, the Indian government would generate revenue. This revenue can not only be reinvested into crucial sectors of the economy such as healthcare and education.

However, there are several drawbacks to this policy since the addictive nature of tobacco products makes their demand inelastic, i.e. the market demand does not fall drastically when there is a price increase. Thus, the actual effect of this indirect tax likely does not completely shift the quantity of consumption close to Qopt (Fig 2). This is demonstrated in Fig 2 where the MPC curve does not fully overlap S1, but rather shifts to S2. It causes the price of tobacco products to rise from Pm to Pa, whereas quantity reduces from Qm to Qa (Fig 2). Shifting the quantity from Qm to Qopt will require a very high indirect tax which has regressive effects such as inefficiencies in correcting market failure as firms reduce production or may even close down in the long run. Although the recommendation of the tax amount is 75% of the retail price, the government may not have perfect information. While this level of taxation may be effective for lower socioeconomic classes, higher social classes may not be as affected. However, in the long run, millions of other lives would be affected as they depend on the trade of bidis for sustenance. Furthermore, there is a possibility of black markets emerging as individuals may not be willing to pay higher prices.

Instead, non-market-based policies, such as regulation, can be implemented to correct this market failure. For instance, the government could limit the amount of tobacco products produced or impose a ban on tobacco use in public places where consumption is high. They could impose severe penalties for consumers who violate the ban which further deters their consumption. Importantly, this policy is not affected by the price elasticity of demand, which is crucial in the case of tobacco products as they are highly inelastic. However, one major drawback with regulation is that it may disrupt equity between firms. If regulation policies are enforced upon firms who are not producers of tobacco products, but have a small percentage of tobacco in their products, the regulation may be unfair. Moreover, the government may incur significant costs to enforce this policy. Threats from black markets also remain an inevitable consequence under both policies. Overall, despite these drawbacks, regulation would be more effective than indirect taxes due to the inelastic nature of tobacco, lack of information and regressive effects.

1.) Evaluate the effectiveness of the expansionary monetary policy. [15 marks]

The Central Bank  manipulates its interest rates in an attempt to bolster the economy from a recession. A recession is a period of a decline in economic activity, as a result of negative economic growth for two consecutive quarters. The Central Bank enforces an expansionary monetary policy – the reduction of interest rates – to increase the economy’s Aggregate Demand (AD). AD is the total demand for goods and services in an economy at different price levels. 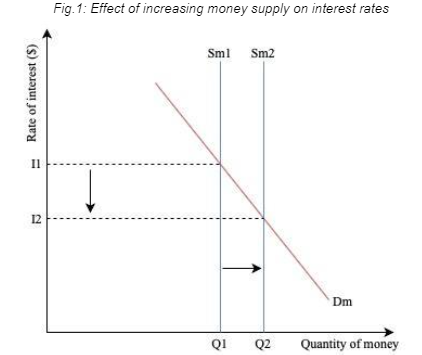 As seen in Fig.1, the reduction in interest rates from I1 to I2 does not occur on its own, but is a response from increasing the money supply from S1 to S2. As this supply rises, the demand for money (Dm) expands, reducing the cost of borrowing. 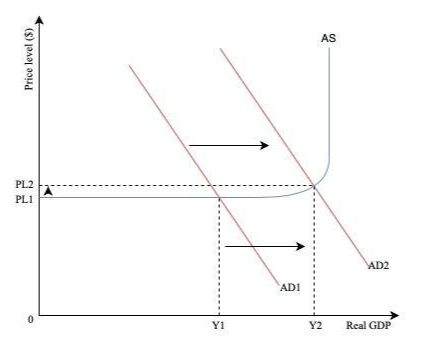 Reduced interest rates boost the components of AD such as consumption and investment as households and firms tend to spend more and save less, consequently increasing AD. This is represented by a rightward shift from AD1 to AD2 in Fig.2. To meet with higher demands, markets and businesses would expand production by increasing employment, which results in a hike in wages. This contributes to their cost of production, directly affecting price level as shown from PL1 to PL2.

Keynes, a British economist, argued that AD is the primary driving force in an economy for which prices and wages are inflexible. In the Keynesian model, an increase in AD leads to a higher real GDP. However, this only occurs while spare capacity is prevalent, as represented by the horizontal region of the Aggregate Supply (AS) curve. Once the spare capacity is exhausted, the firm is forced to produce at a higher price level. Hence it is efficient to produce at the full employment level of output (Y2), resulting in economic growth.

Firstly, the increase in AD will eventually lead to economic growth.  It can then be inferred that economic growth will give rise to multiple benefits such as reduced poverty due to higher incomes and better education, improving society as a whole. Stakeholders such as consumers are able to borrow and spend with ease, hence resulting in higher living standards. Firms could benefit from the lower interest rates by increasing their investment in R&D, which could lead to increased efficiency and lower prices, making it prudent for the health of the economy in the long run.

However, there are a few drawbacks. Although consumption and investment may increase, it could take several months for a distinctive change to occur as interest rates are only a component of the various deciding factors. This policy also disfavors lower-income groups as it not only leads to inflation as firms set higher prices, but also reduces their ability to borrow loans as banks fear that the consumers will not pay them back. Lastly, the Federal Reserve may lose focus on pursuing other goals, such as exchange rate stability.

Alternatively, market-based supply side policies could be implemented as they increase the economy’s productive potential by improving quality and quantity of inputs. As market and business investments are one of the main ways by which the economy could prevent itself from entering recessionary territory, the appropriate policy must focus on those aspects mainly. The government may provide an incentive to work as disposable income rises when lowering income taxes. Whereas for the firms, a reduction in corporate tax gives incentive to raise productivity by increasing quality and quantity of capital. Furthermore, the government can increase spending on long term assets such as education and infrastructure, thereby creating jobs directly. As education allows the development of skills, there will be a larger skilled labour force in the economy, whereas infrastructure reduces production and transportation costs, increasing productivity and leading to long-run economic growth. This helps achieve all macro-economic objectives to a larger extent. However, as they are very expensive to do, it involves an opportunity cost.