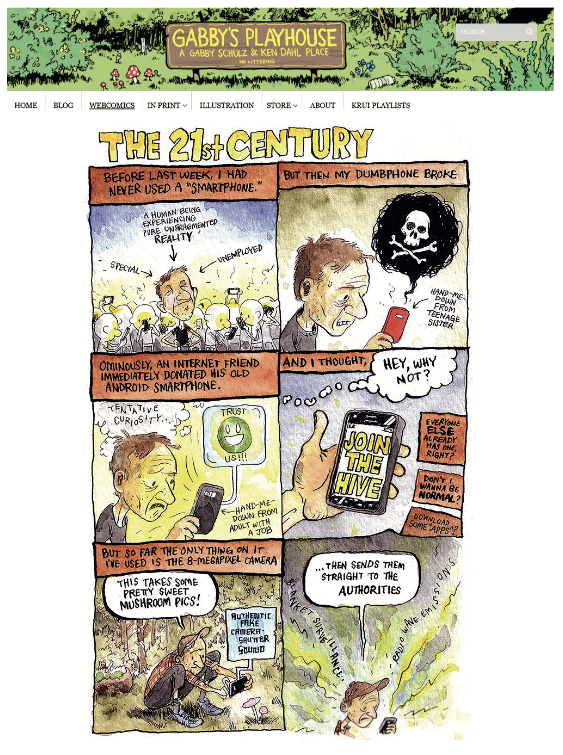 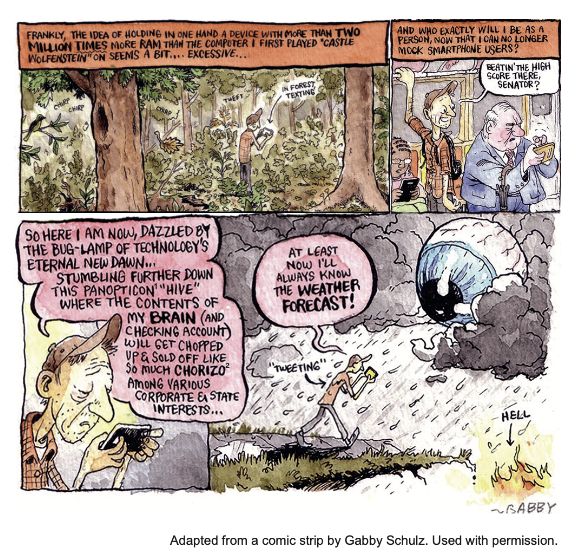 Analysis of the text above:

⦁ Analyze the words and images that characterize the protagonist and his world.

⦁ Comment on the significance of the final frame in relation to the cartoon as a whole.

Comic strips are a sort of a canvas that comic artists use to make a statement. The themes usually surround reality, political or non-political views, and norms that they are possibly against. This particular piece, made by Gabby Schulz, is a way for her to provide her take and insight on how technology has been adapted into our lives. The title of the strip, The 21st century, suggests how the current and the last few years have been molded by the advancements of today’s technology. The brief purpose of this piece was for Schulz to inform the general public about the threats that this technology, specifically, cell phones are causing. This comic strip is about an old man who is unfamiliar with the current technology and finds it difficult to adapt to the present century. The strip is written in a way with dark humor and sarcastic comments.

This comic strip is one of Schulz’s published pieces on her website. Since it is possibly one among her other comic pieces, the audience is most likely the regular visitors to the website. The audience may share similar ideologies with respect to the effect of technological advancements and other such topics that she’s spoken about in the past. Coming down to the primary purpose of this text, it is essentially to entertain her readers. This is achieved through her use of humor and other features of a comic strip, be it illustrations or sarcasm.

In the first panel, the protagonist i.e. the main character of the comic strip is depicted as the “odd one out” in comparison to the people in the background. He is seen to be a sort of an unemployed man – as it states in the strip – that is clueless about what was happening around him. He is considered to be ‘special’ as he is not one among the people in the background. As for the people in the background, they are illustrated in a different way (meaning, the looks and characteristics of these people are completely different from the main character) almost like an alien given that they are staring into things that are reflecting yellow light. The illustrations of these people are also not given much importance as the purpose was to focus on the old man and the pride expression on his face. The expression on his face is also quite ironic given the fact that everyone around him that is using a smartphone is glum and dull and he is a happier man if you disregard his messy-unemployed exterior. This is the first realization made by the public that smartphones have actually made people distant and has reduced in-person communication.

Schulz cleverly keeps the humor going across the second and third panel as well by addressing people as “teenage sister” and an “adult man with a job” and addressing the phone as a “dumbphone”. This is rather a little bit of dark humor considering the fact that he is an old, grown up man and he is in fact unable to procure these things on his own and is forced to receive hand-me-downs for things as basic as smartphones – according to the 21st century. Humor is also sensed when people deem these phones to be a necessity in the present times – it also gives a sense of nostalgia for the older readers. In the fourth panel, there are a series of rhetorical questions that the old man asks himself about “joining the hive”. These questions depict the mentality the general public has on smartphones. “Join the hive” can be a slang that is used in the 21st century. The word “hive” can be interpreted as a metaphor of some sort of a herd that you could join as a way to conform to the present cultural norms. Essentially, people just like to go with the trend and owning a smartphone has become one. People see other people use it and they have the need to get one for themselves. Dark humor is again brought into this ideology thus keeping the attention of the readers.

Proceeding to the fifth and sixth panel, the humor is showcased through the old man’s inability to understand using a smartphone. Furthermore, the fifth panel also talks about how the smartphone isn’t as great as it seems to be since all the old man has done with his phone is take pictures of boring-looking mushrooms. This is another realization to the general public that there aren’t many intricate things you can do with a basic smartphone. And despite its minimal functions, we seem to be addicted to it. The sixth panel talks about how everything that one does on their smartphone is sent to the authorities given the amount of time that is spent on it throughout the day. We become so engrossed in our phones, we don’t realize that whatever we do and wherever we go is known by the invisible eyes of the government through our screen. This is yet again another instance where Schulz has used dark humor as a way to entertain but also notify the general public about the risks that come with using a smartphone. Therefore, the secondary purpose of the comic strip can be to highlight and make people aware of the threats caused by smartphones

With regards to the style of the comic, the illustrations and art are not drawn with a lot of complexity, but with just enough details to communicate the message. In the beginning screens, the main character’s facial features are brought down to the very basic strokes to show what he is feeling when compared to the featureless bodies drawn behind him. It clearly sets them apart, depicting that he is from a different generation and is struggling to adapt to the present time. But in reality, the old man is drawn with very generalized features indicating that he is just one among us. We could essentially be him at the end of the strip. Schulz intends to put the reader in the shoes of the main character to fully explain and make the public comprehend the risks of the usage of the smartphone. In addition to the style of illustrations, Schulz has also used colors in a specific way to highlight the urgency of the problem. This is shown by how the initial screens start off with white thought bubbles and eventually become a more brighter pink color. This color change could very well also depict the emotion of the main character as he is possibly annoyed with himself for adjusting to how society is right now and that this is how it is going to be. The text is also written with sarcasm again where Schulz has used it as a tool to entertain the readers. However, the statement on the last panel is agreed by a lot of people thus reflecting the indulgence of the general public. The critical, sarcastic tone is also created in the last panel through the word “tweeting” as it has become so common in today’s world, it is now a verb or an action. So much so that it shows that anyone and everyone can become addicted to the very thing that the government uses to watch over our actions.

Delving deeper into the details of how the phone is portrayed as dangerous, in the second panel, a white skeleton is used against a black background to indicate that it is dead. Not only does it show that it’s broken, but also the fact that it is poisonous therefore leading to unexplainable consequences. In addition to this symbol, there is another one in the third panel where it says “Trust Us” with a smiley face. While it should mean to trust in a friendly way, the current generation has in fact changed the meaning for it to be deceit and unfaithfulness. The symbols used to express that phones are dangerous is portrayed throughout the strip and even in the end where the huge eyeball is looking over the old man in the last panel. Not only does this show that we’re being looked over intensely, it also creates an uneasy imagery of disgust for the reader. It can be noticed that Schulz is repeatedly trying to bring in a grotesque imagery of phones using sarcasm, humor and illustrations.

Lastly, to summarize, it can be said that Schulz used her perception of how advanced technology is dangerous to establish herself as a renowned comic artist through this strip. Her critical tone through symbols and comic features can be seen in numerous places across the strip. For instance, she used the word “dumbphone” in the second panel and “smartphone” in the third panel. Here, she criticizes the fact that there is an irony in calling it a smartphone because it does not necessarily make us smart given the numerous reasons why it is risky. She indirectly criticizes the general public for their bad judgment on what is smart and otherwise. Another instance was the title that she used – “21st century”. This has a satirical and again a comical tone to it as the strip essentially mocks the people of this century. She is challenging the vision of our current time. All in all, the title does the job of attracting the reader’s attention and makes you curious. Schulz has also managed to use metaphors such as the “Panopticon hive” and “chorizos”. A Panopticon is a circular building arranged in a way where all the interiors are visible from one point. This is directed at the government and other authorities about how they’re monitoring our every move by just sitting in one place. Schulz also uses the imagery of a “chorizo” and how it is “chopped up” and served to the government. This is again an unsettling imagery as she is comparing our brains to a type of Spanish sausage that is served to the government. The metaphor also explains how the government is able to obtain information about us in a very detailed way and not just the surface. Lastly, she illustrates hell in her final panel. This shows that people who eventually become addicted to smartphones are just walking down the road to hell without realizing what’s happening since their eyes are practically glued to the screens. She uses the word “hell” to characterize the smartphone culture in the present century. In doing all of this, she has very well established that she stands a negative stance and as a challenger to the present and upcoming technological advancements.

In conclusion, Schulz has managed to successfully portray a serious issue through a comic strip in a subtle, fun and profound manner. She has a mix of literary devices, tone, and illustrations that engrosses the reader into reading what she wants to convey. The way the strip ended was in fact intended to leave the reader to rethink and reconsider their perception of technology and how it has possibly done more bad than good. While she attempts to talk about a serious issue, she also manages to increase her traffic to the website.