1.)  The circuit below can be used to measure the internal resistance of a cell 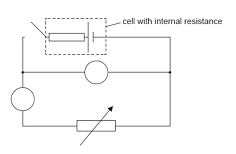 a.) Label the ammeter as A and the voltmeter as V in the circuit

b.) Upon performing an experiment, the graph for the current vs potential difference is shown below. Using the graph, calculate the best or closest estimate for the resistance of the cell. 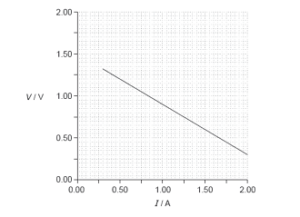 Answer
When a circuit is not connected, the ammeter or voltmeter’s pointer is supposed to be at zero, Therefore, a zero error reading is when a non zero reading is displayed when it is supposed to show zero. It is essentially a calibration error.

Answer
A positive number on the ammeter means that more electricity is being received by the battery than is being used, suggesting the regulator is not working efficiently. All the measurements would be higher and incorrect. Nevertheless, since the value of all of it increases, there will be no change in the internal resistance (the slope of the graph).

2.) This question is about a standing wave in a vibrating string

3.) A student pours a can of a carbonated drink into a cylindrical cup after rigorously shaking the can. A large volume of foam is produced eventually filling the container. The graph below shows the time vs the height of the foam: 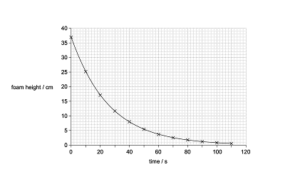 a.) Determine the time taken for the foam to drop to half of its original height

Answer
The initial height of the foam (0 seconds) was 37 cm. Therefore, half of its height will be 18.5 cm. To find the time taken, the data point of time when the height is 18.5 cm will be the answer. By checking the graph, the time taken is between 18 to 19 seconds.

b.) Determine the time taken for the foam to drop to quarter of its original height

d.) Outline the stages the star, Epsilon Indi undergoes once it leaves main sequence till its final stable state
Answer
A star stays in the main sequence until all of the hydrogen has fused to form helium. The helium core now starts to contract further and reactions begin to occur in a shell around the core. Once the core is hot enough for the helium to fuse to form carbon, the outer layers begin to expand, cool and shine less brightly. The expanding star is now called a Red Giant. The helium core runs out, and the outer layers drift away from the core as a gaseous shell, this gas that surrounds the core is called a Planetary Nebula. The remaining core is now in its final stages. When the core becomes a White Dwarf the star eventually cools and dims. When it stops shining, it becomes a dead star and is called a Black Dwarf.

2.) Shown below is a Hertzsprung-Russell Diagram. The following data is available for a star X with respect to the Solar mass (M0) and the Solar Radius (R0): 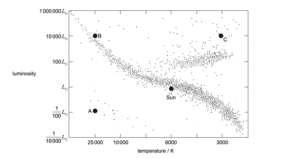 c.) Star X eventually becomes a White Dwarf.
i.) State the star type for A, B and C
Answer
A: White Dwarfs
B: Main sequence
C: Red Giant

ii.) State what prevents Star X from collapsing further after becoming a white dwarf
Answer
An electron degeneracy. Electron degeneracy pressure will halt the gravitational collapse of a star if its mass is below the Chandrasekhar limit (1.44 solar masses) which it is since we’re talking about the Sun here. This is the pressure that prevents a white dwarf star from collapsing.

3.) Light from a galaxy far away observed on Earth shows a redshift of 0.13.
a.) Define redshift
Answer
Redshift is when the wavelength of the light is stretched, so the light is seen as ‘shifted’ towards the red part of the spectrum. It means that the received wavelength is longer than the emitted wavelength.